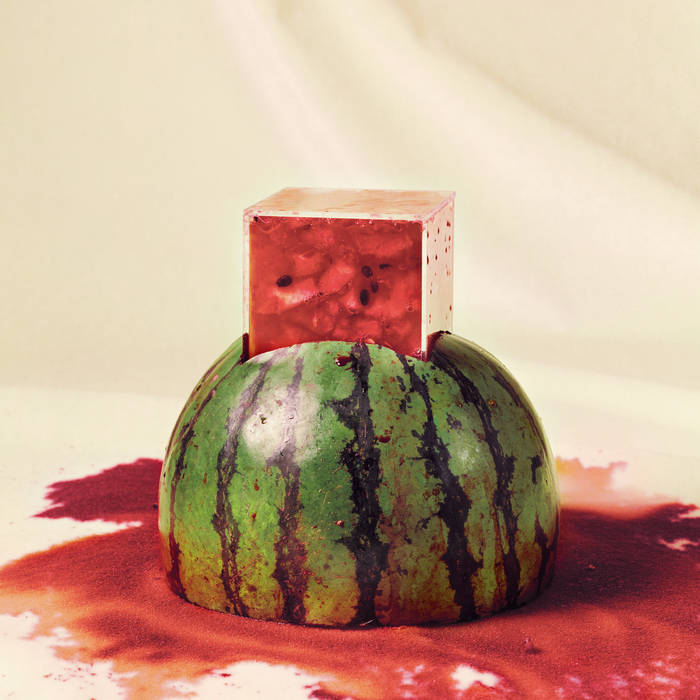 Empty Editions presents Palina’tufa, the newest work from saxophonist Seymour Wright and percussionist Paul Abbott’s long-running duo XT. Wright and Abbot’s respective practices have been marked by a simultaneous engagement (with) and desire to challenge the limitations (of) the British tradition of improvised music - represented by groups such as AMM and John Stevens’ Spontaneous Music Ensemble. This album charts a new trajectory for Wright and Abbott, as they draw on recent live collaborations with RP Boo and Container in developing a sound which hybridizes the spontaneous interplay and timbral experimentation of free improvisation with the recursive formal structures of dance music.

The album’s title is an enigmatic portmanteau of “Palina” (taken from the name of a species of butterfly sighted by the duo during recording) combined with the word “Tufa” -- a type of rock composed of ash ejected from a vent during a volcanic eruption; the bedrock of the island of Hong Kong. Compellingly, the green sheen of the Palinurus butterfly is not produced by pigments, but emanates from the microstructure of it’s wing scales. Similarly, XT’s Palina’tufa contains a brilliant internal logic of stacked component parts all amalgamated into a singularly iridescent instrumental structure.

Recorded during a two week studio residency in Hong Kong, Palina’tufa departs from XT’s previous albums - primarily documentations of live performances - in its embrace of the recording studio as a form of instrumentation: a tool to sculpt, overdub and (re)assemble their chimeric sounds. The result is a striking cybernetic version of the classic sax-and-drums duo pioneered by legendary groupings such as John Coltrane and Rashied Ali, Evan Parker & Paul Lytton, and Jimmy Lyons & Andrew Cyrille. Palina’tufa turns the implied (and frankly, somewhat tired) tropes of this form on its head, pushing restlessly forward into the domain of a synthetic post-genre music. Wright's unconventional use of feedback and Abbott's heavily deconstructed electro-dance textures expand upon this simulated space, unfurling their instrumentation into an authentically liberated territory.

Across four dynamic fifteen minute cuts, the duo craft an esoteric response to the real (and imagined) landscape(s) of Hong Kong. Interpreting their experience of the island as a kind of extended metaphor, Palina’tufa translates chance encounters, pockets of cultural history, vernacular architecture, and local wildlife (among other phenomena) into organizing principles for the creation of speculative music. Palina’tufa is a brilliant showcase of Wright and Abbott’s composite sound: naturally synergistic, with careful attention paid to how psychogeographical experience is transposed into the deeply considered interplay of their respective instruments. A stunning listen, the album’s various movements respond to scenes in proximity to the Tin Wan (Aberdeen) area: the past/future poise of Permanent Cemetery; the human densities of Duck Tongue Island; the black garlic/gypsum of Empty Gallery itself.

Palina’tufa expands on this emerging style of electronically mediated improvised music by further compartmentalizing their playing through a series of concepts, limits, and methods to organize their materials into distinct classifications. This approach creates an album architecture, a time/space organized into “Stacks” (recalling vertical cylinders, tubes, pipes, columns), “Orbits” (recalling Chinese folk music, weather systems, paths travelling upward), and “Angles of Incidence,” (a concept inspired by Pere Portabella and Cecil Taylor) that responds to the social, physical, and temporal forces of a city. Loosely, these structures spatially reorganize the “time” in their playing, reversing, eliding, truncating, and magnifying content. This technique recalls everything from Anthony Braxton’s diagrammatic lines, colours, and figures that encode structural and vibrational elements of sound, through the pentatonic scale of Chinese folk music that was integrated into a symbolic matrix referencing the movements of the seasons, planets, and body-politic, to Alejo Carpentier’s search for a musical origin in fiction.

Seymour Wright’s work is about the creative, situated friction of learning, ideas, people, and the saxophone -- music, history and technique ­-- actual and potential. His solo work is documented on three widely-acclaimed collections: Seymour Wright of Derby (2008), Seymour Writes Back (2015) and Is This Right? (2017), ith a fourth “Rites” scheduled for release in 2019. Current projects include: abaria with Ute Kanngiesser; [Ahmed] with Antonin Gerbal, Joel Grip and Pat Thomas; @xcrswx with Crystabel Riley; an unnamed trio with Crystabel Riley and Ute Kanngiesser; GUO with Daniel Blumberg; The Experimental Library with Evie Ward; XT with Paul Abbott; a trans-atlantic duet with Anne Guthrie, and, with Jean-luc Guionnet a project addressing an imaginary lacunae in Aby Warburg's Atlas Mnemosyne. He is also a founding member of The Creaking Breeze Ensemble. His writing has been published in C//A, Sound American and The Wire.

The release was recorded in Hong Kong over the course of two weeks with the creative expertise of David Sum and Tomas Chan and is mastered by Rashad Becker at D&M. The LP is produced in an edition of 300 on 2 x 180 gram vinyl featuring artwork by Ikebana artist Kosen Ohtsubo.